Recently I began to listen to Angela Watson’s podcast, Truth for Teachers. Each episode I listened to had valuable information and advice, but Episode 114: Seven Ways Teachers Can Push Past Imposter Syndrome was the one that made the most significant connections to my own experiences.

Many people have experienced moments where they felt like a fraud. I think it’s helpful to remember we aren’t the only ones who feel this way. People who’d be considered wildly successful struggle each day with the idea that everyone is going to discover their admiration is misplaced. Actress Meryl Streep wonders why anyone would pay to see another of her movies. Revered scientist Albert Einstein saw himself as an involuntary swindler because the esteem people had for him didn’t match his estimation of his contributions to science. Although he accomplished more than most people, Einstein still felt the weight of all the questions he never answered, or worse yet, didn’t even think to ask. Comedian and actor Mike Meyers admitted to worrying that everyone would figure out he had no talent. People in every profession, at every level of success and in every stage of life have had moments where they felt like praise someone gave them wasn’t earned. 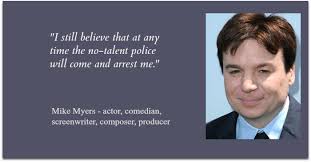 Angela Watson’s podcast focused specifically on advice for teachers who are struggling with Imposter Syndrome. As an educator, I see how struggling with feeling like a failure drains energy away from students. I’d see a colleague agonizing over how Pinterest-worthy other classes were. As a high school teacher, I don’t face the same kind of pressure as elementary teachers to have creative bulletin boards and a continually changing display of student achievement on the walls, so I rarely spend time worrying that my classroom isn’t pretty enough. My concerns revolve around the turn-around speed of assessment, the effectiveness of assessment as a tool for growth and the ever-present guilt about not putting in enough time with extracurricular activities. My worst fear is probably the same one that gave Angela Watson nightmares: That my students might run wild and display complete contempt for the rules of the classroom and the school. I live in fear that someone would ask me to explain to my classroom management plan, after which I would have to admit that I don’t have a clue what I’m doing.

Since my main objective is not to present Angela Watson’s advice about how to overcome Imposter Syndrome as my own, I want to make clear that the main points of advice below are from the article already referenced.

I worked with a teacher early in my career who admitted extracurricular activities were his priority. Binders were lined-up along the back wall of his classroom with lesson plans and handouts for each day of his courses. He told me those binders had remained the same for ten years and felt that was justified because history doesn’t change, which is an objectively false premise. Of course history changes, but only if we are open to changing the way we think. Society is moving away from supporting the idea that the victors get to write history. There was a more significant matter I was concerned about than the question of his priorities: How was he demonstrating self-reflection in his practice by teaching this way? He believed he was demonstrating efficiency and forethought, which had the added benefit of allowing him more time for coaching. If another teacher did the same thing, but to get out the door by 4:30 without having any more work to do for the day, people would question their commitment. That was never going to happen to a teacher who put in the kind of coaching hours this guy did. Making this observation so early in my career lead me to form the following impressions:

a) The high school educators who were most likely to be considered the most valuable to administrators strongly resembled the kind of students who tormented me when I was a high school student.

b) Administrators didn’t care how reflective and adaptive you were as an educator, as long as you were willing to be a pack-mule when it came to extra-curricular activities.

These impressions seeded dread in me about what my future as an educator would hold. I am an introverted person, which seems to affect my ability to lead extracurricular activities more than it impacts my classroom teaching. I guess that it’s due to the increased number of parents and community members with whom I am required to communicate. My awkward confession for the day is that I’m afraid I might be more comfortable with students because the balance of power tips in my favour in a way it doesn’t with parents and community members. I hope that fear is unfounded.

I began to be afraid that I would never be seen as an effective teacher if I couldn’t get past my paralyzing dread of instigating and leading extracurricular activities, regardless of the work I put into other areas. As you can probably tell, that didn’t stop me from developing as a reflective teacher, but it did mean that I let the fears sit on me more than many educators would.

I’ve already outlined why it’s important to be a reflective teacher. Angela Watson recommends we do this without self-judgment.

3. “Use feelings of doubt to help you experiment with teaching styles until you figure out what works for you.” Angela Watson

Maybe that teacher I mentioned in my first point went through years of trial and error until he crafted what he saw as the perfect lesson plans, and he didn’t want to deviate from what had been successful. Life is all about change, which means that if you aren’t changing, you are stagnating. Each group of students is different. If we treat them all the same, we are going to have to put a lot more time into classroom management than we might have when we initially created what we thought was the perfect lesson plan. Our life experiences change us as educators, and the world changes. If we don’t adjust our lessons to accommodate these changes, we are going to find those perfect lessons we developed become less effective over time.

4. “Accept that it’s impossible to please everyone, and use criticism as an opportunity to reflect on WHY you’ve made your choices.” Angela Watson

Most of my career has been spent teaching in First Nations (Indigenous) schools. In many of these schools, there were staff members or even leadership who didn’t quite understand what most of the staff were trying to achieve. It can be challenging to stand in the face of someone who is telling you that your culturally sensitive lesson doesn’t fit with the colonizer curriculum, especially if that person is your administrator. That doesn’t mean you shouldn’t continue to do what you are sure is right for the students. I am happy to say that I never saw the teachers around me waiver from their vision or convictions. You are going to have at least one parent, student or administrator who thinks that you are ineffective in some way. Make sure to practice self-reflection, but don’t waiver from the essential things that you know are right because of that one person having a different opinion.

5. “Be honest with your students when you don’t know what you are doing.” Angela Watson

In the interest of complete transparency, I have this strategy down to an art. It might have something to do with my neuro-diversity, but I never hesitate to admit when I don’t know something, or when something is outside my standard skill set. My students have never gotten angry or teased me about not being sure. They enjoy the process of discovering the answer as a team.

6. “Find a colleague who’s willing to be your Imposter Syndrome Co-Conspirator.” Angela Watson

Angela Watson points out that the easiest way to find a person who reveals when you’re letting Imposter Syndrome get the best of you is to be that person for someone else. Being willing to admit that you feel like you don’t know what you’re doing isn’t the point in this strategy. It’s having someone in your life who can help you feel confident you know more than you’re giving yourself credit for, even if it’s to remind you that you have the life-long-learning skills to educate yourself about the missing pieces.

7. “Change your self-talk so Imposter Syndrome propels yourself to be even better.” Angela Watson

Just like so many things in life, having a positive attitude can help you overcome Imposter Syndrome. Don’t wallow in self-doubt. If you don’t know the answers you are seeking, get to work finding them. You’re a smart and resilient person. You can do this. Tell that little Eeyore in your brain to settle down.

The second part of Imposter Syndrome that I want to explore is more personal. As an Autistic (I use Identity first language, as most Autistic do), I find that Imposter Syndrome is so ubiquitous it becomes difficult to understand there is an alternative. Autistic masking is not only encouraged, but expected, and it causes anxiety at a level that most people would have trouble understanding. I’m not talking about the kind of anxiety you feel the night before a major assignment is due or even the kind you might experience when you have to get up in front of people to speak. What I’m talking about is the kind that makes you lose the ability to speak for long periods or the kind that makes you have a panic attack so severe that you have to go to the hospital. It’s the kind that makes you start shaking at the memory of something you said twenty years ago.

It’s the kind of anxiety that makes you question whether you might not be a human being after all.

Choose some aspect of your identity. Now imagine that the majority of what you saw in various mediums misrepresented that aspect of your identity. That would naturally cause a great deal of anxiety. When the average allistic individual experiences an overwhelming feeling they are a fraud, that comes from their impression of themselves not quite matching with how other people see them. When the average Autistic experiences Imposter Syndrome, it usually includes questioning whether they are a fraud as a human being. If you are confused about where this might come from, ask yourself if you’ve ever witnessed someone talking about an Autistic person right in front of them, as if they were a piece of furniture. Ask yourself if you’ve ever read an article that talked about Autistic’s having eyes made of black glass or theatre companies that turned the Autistic characters into puppets. Ask yourself if you’ve ever read an article that implies we are blank canvases or empty vessels. The list goes on and on.

When you consider all of this, it isn’t hard to understand why an Autistic would question their basic humanity as part of their experience of Imposter Syndrome.

I guess this is the part where I need to make some useful suggestions about how to deal with it. I am going to divide this advice into two sections: One aimed at allistic people and the other at Autistics.