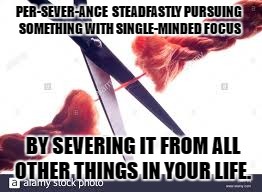 Perseverance is steadfastly doing something, even when it’s difficult, and the payoff is delayed.

PerSEVERance is a little different. It’s when you sever that task from everything else and pursue it with a single-minded focus. When pursuing things close to the heart, most people consider themselves capable of tremendous focus. That still doesn’t fall into the category of perSEVERance.

I will use my father as an illustration of what real perSEVERance can look like. My dad had a coworker who left and came back ten years later. When this coworker returned, my dad picked up their last conversation in the exact spot it had ended.

This trait can cause confusion and miscommunication. My dad sometimes has a hard time with Twitter because the short form causes his point to be lost. His long, stream of consciousness style Tweet threads can be easy for people to misinterpret; especially when he stays on the same topic for days or weeks.

There are industries where employers are recognising the trait of perSEVERance as a potential asset. Silicon Valley has recognised the benefits of many tedious aspects of coding. To avoid feeding stereotypes, I try not to generalise traits that can be part of being Autistic. There’s one reason I’m more than willing to promote the idea that some Autistics (I use Identity first language as most Autistics do) possess the trait of perSEVERance:

It would be a good thing if someone reads this blog and thinks to themselves, “Maybe I should try hiring an Autistic person for this task other employees have lacked the focus to accomplish.”

Autistics need opportunities in the workforce. If this premise gets some Autistics employment, all the better.