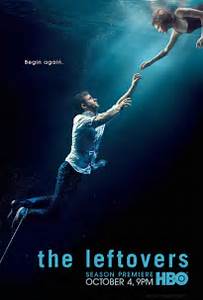 Initially published on my Blogger account in 2015. May contain a spoiler for The Leftovers, and C.S. Lewis’s novel, The Last Battle

I could probably write about International Assassin (The Leftovers, Ep.8, Season 2) each day for the next month and still not have covered everything. This show is densely layered and richly written. With that in mind, I’m going to focus on one particular aspect of this episode.

Season two starts within Earth’s ancient past, with a group of people sleeping together in a cave. A pregnant woman gets up in the night to relieve herself. An earthquake happens while she’s outside, resulting in the collapse of the cave opening. Whether the rest of the cave collapsed is unclear. The shock sends her into labour, forcing her to set aside her grief and focus on survival. She delivers the baby and sets out in search of other humans. It doesn’t end well for the woman, but she succeeds in finding safety for the child.

The episode shifts to Kevin, speaking to a woman who looks exactly like Patti, although she appears not to be her. During this conversation, the Patti-duplicate tells Kevin that their cave has collapsed. We must assume this allusion to the events at the beginning of the episode is for the benefit of the audience rather than the characters. It was meant to trigger our memories of something we may have learned in school, or other facets of entertainment and culture. Specifically, it is an allusion to Plato’s Simile of the Cave.

When I was about eleven-years-old, I read C.S. Lewis’s Chronicles of Narnia. The final book of this series is called The Last Battle, and the last chapter of this book is called Shadowlands. Aslan returns to Narnia for the last time. He calls Narnian’s to follow him. On Earth, the Pevensie’s hear his call, with the exception of Susan. Some people have cynically suggested she was excluded because she wore makeup, while I  tend to think Lewis was trying to say she’d become too caught up in the trappings of the world to hear Aslan’s voice.

Aslan is a metaphor for Jesus, so the implications are clear. Shadowlands is a description of the Rapture. Christopher Eccleston’s character, Matt Jamison, spent all of the first season having his ass kicked for telling people what happened when so many people disappeared at the start of the series wasn’t the Rapture, because bad people were taken and good ones were left behind. The fact remains that both the title of the show and events are meant to evoke questions about the Biblical concept of the Rapture. In the same way, Patti referenced Plato’s Cave, Shadowlands also is built around this concept.

Plato, a Greek philosopher born around 428 B.C.E., used the simile of the cave to make his ideas more accessible. He told a story of people sitting around a fire inside a cave. They watch shadows dancing on the wall, and believe what they’re watching is the reality. It’s only when they step out of the cave and see the sun and real-world that they realize they’ve been watching shadows their whole lives.

When the Patti-copy tells Kevin our cave has collapsed, it reinforces what The Guilty Remnant has been saying all along. The world ended. But if the world ended in Rapture, we come back to Matt’s struggle: Why have horrible people disappeared while innocent people have been left behind?

I keep picturing the dwarfs in The Last Battle; who put closed their eyes and put their hands over their ears when Aslan returned. They had lost faith because of a donkey who went around in a lion skin pretending to be Aslan, and wouldn’t risk being fooled again. They were left in a burning cabin that they refused to acknowledge was on fire, while Aslan took other Narnians to his kingdom.

I had many questions for my dad when I read this book at the age of eleven. My dad brought my attention to the lands the Narnians passed as they travelled with Aslan to his kingdom. He quoted this verse from scripture:

John 14:2 In my Father’s house are many rooms. If it were not so, would I
have told you that I am going there to prepare a place for you?

The lands they passed were rooms in his Father’s house prepared for other people.
Thinking about this lead me back to fake-Patti’s words. She told Kevin the people inside the cave, the ones who disappeared, might have found another way out. They might have exited and continued on with their lives. The left-over people would have to do the same. In this way of thinking, there are no leftovers. They are simply in a different room of the same house. But it’s hard to accept this way of thinking because it seems cruel. Why keep loved ones away from each other? It only becomes more acceptable if you believe it isn’t a permanent condition.